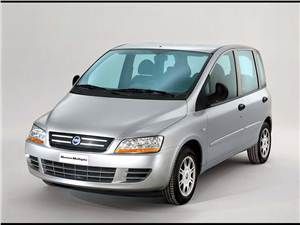 Table of factory and suitable tire sizes for FIAT MULTIPLA. 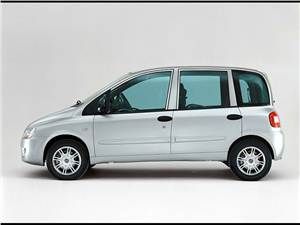 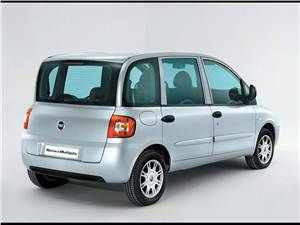 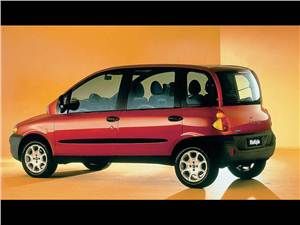 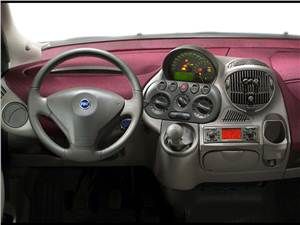 The original first generation Fiat Multipla was presented to the world public back in 1998. The car turned out to be extremely controversial. He had a subcompact line of power units with one rather unusual engine, a six-seater practical salon with two rows of seats, and also an extremely controversial appearance, thanks to which he got into the Museum of Modern Art in 1999. Also, unofficially, on the air of the popular English TV show, he was recognized as "The ugliest car". On the assembly line, the original generation lasted six years, after which it received a large-scale restyling in 2004. The novelty was distinguished by a much calmer and more familiar design for an ordinary motorist. The model has a sloping hood with a protruding middle part, elongated headlights with eyeliner from orange sections of the direction indicators and a trapezoidal radiator grill with the manufacturer's logo. The front bumper was painted in body color and received a massive air intake, covered with thin plastic ribs. Fiat Multipla is a six-seater compact van. Its overall dimensions are: length 4090 mm, width 1871 mm, height 1695 mm, and wheelbase 2666 mm. The ground clearance is small - only 130 mm. The model is built on the Fiat Brava platform and also has a fully independent suspension arrangement. The front axle houses the classic McPherson struts, and the rear is a multi-link design. A key feature of the Multipla is the seating arrangement. For the first time in the world, Italian engineers decided to make a car with a three-seater row. Such a layout of the cabin made it possible to greatly reduce the length of the car, which is quite critical for potential buyers from big cities. Moreover, even in a six-seater layout, the compact van has a fairly roomy trunk. By default, when loaded under the rear shelf, it can hold up to 430 liters of cargo. If the rear row is folded down, this figure can be increased to 1,850 liters. The compact MPV is equipped with several subcompact engines, five-speed manual transmissions of variable transmissions and exclusively front-wheel drive. Petrol Fiat Multipla are equipped with a 1.6-liter in-line naturally aspirated petrol four. It develops 103 horsepower, accelerates the car to a hundred in 12.6 seconds, can develop up to 170 km / h and consumes about 9 liters of fuel per hundred in the combined cycle. Alternatively, a similar unit from the Bi-Power range can be selected. Its key feature is its high compression ratio, allowing it to run on both gasoline and natural gas. Diesel versions received a 1.9-liter inline turbo four. Depending on the version, it produces 115-120 horsepower, accelerates the compact MPV to 100 km / h in 12.1-12.4 seconds and reaches a maximum of 170-178 km / h. Fuel consumption will be 6.4 liters of diesel fuel per hundred kilometers at the same driving pace. Fiat Multipla is equipped with everything you need for a safe and comfortable journey. The car can be equipped with several airbags, anti-lock braking system, electrically adjustable exterior mirrors, air conditioning, heated front seats, electric windows in each door, alloy wheels, an audio system, and a multifunctional on-board computer.