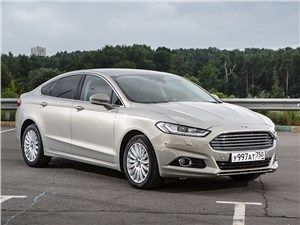 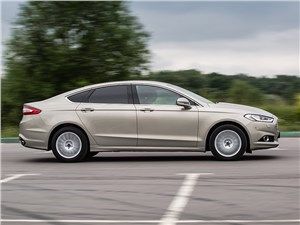 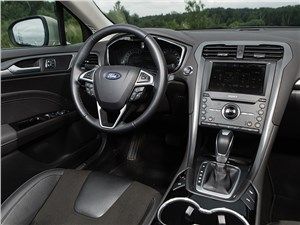 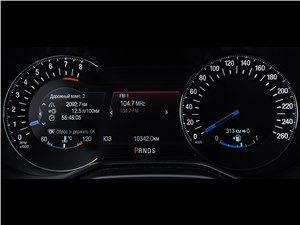 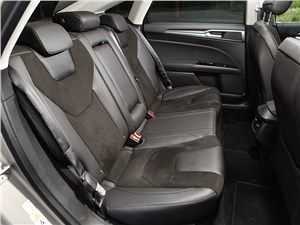 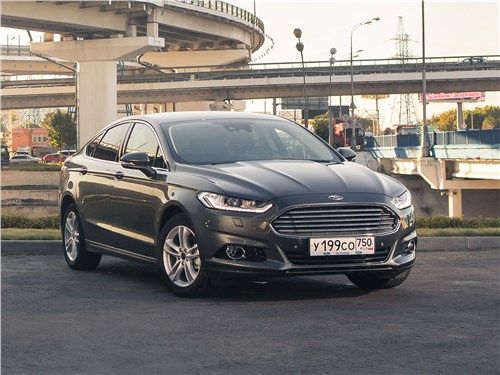 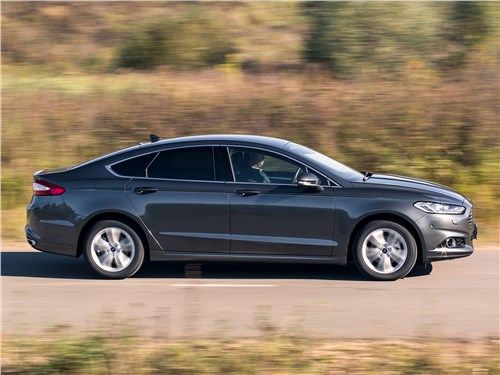 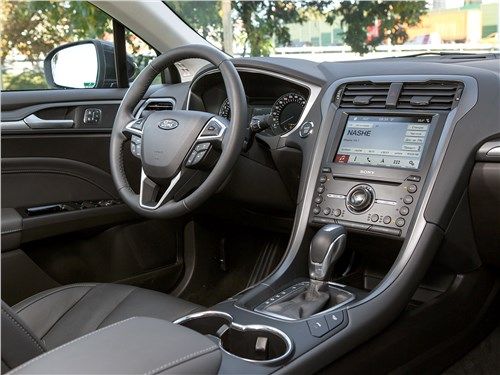 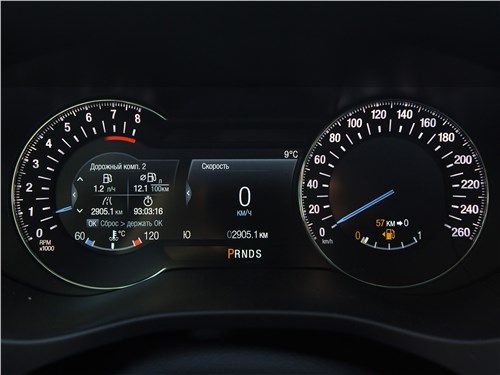 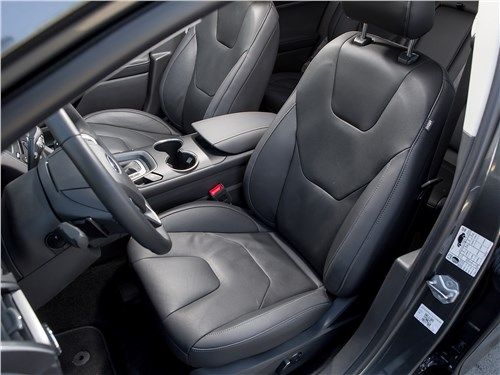 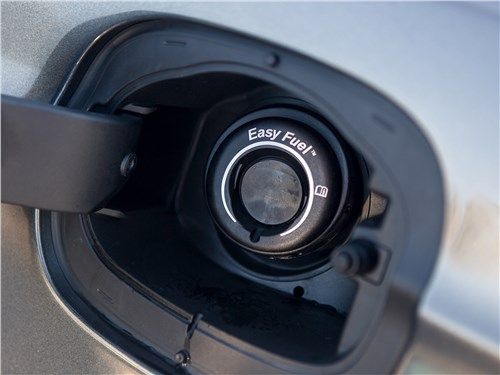 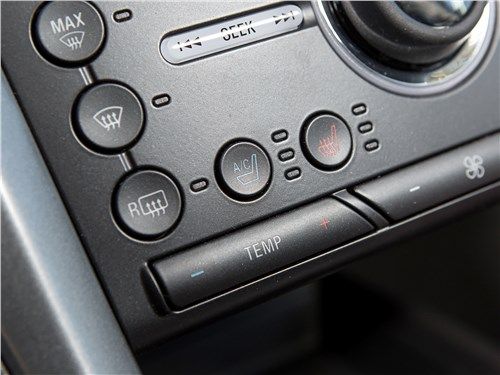 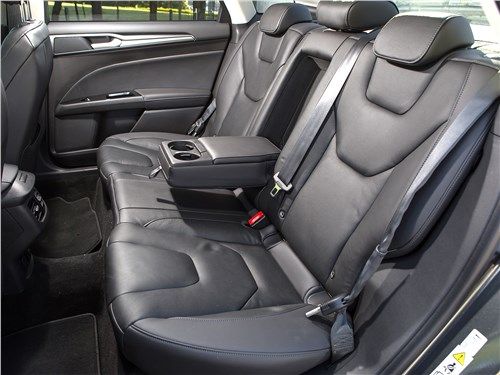 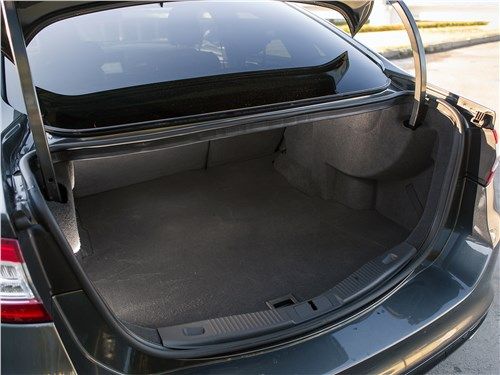 In 2014, at the production facilities of the plant in Vsevolozhsk, the production of the new fifth generation Ford Mondeo was launched. It is worth noting that the novelty got to domestic motorists for a long time, European and American sales of the model started several years earlier. The car is built on a new platform, has a modern line of units, an interesting interior and stunning design. Indeed, the Mk V looks an order of magnitude better than its predecessor. It has narrow, angular headlamps that extend onto the wings with a lensed filling and a thin LED eyeliner for daytime running lights. The radiator grille is made up of a variety of tight-fitting chrome-plated horizontally oriented fins and is octagonal in shape. Under it, on the front bumper, you can see a small air intake, covered with a black plastic grille. On the sides of it there are special recesses with black glossy inserts. They give the front end a rather aggressive look and are home to the oval fog lamp blocks. In general, the designers have radically transformed the image of the model, giving her a more impetuous and dynamic look. Ford Mondeo is a mid-size five-seater D class car. It is available in three body styles, however, only a four-door sedan has reached our market. Its overall dimensions are: length 4817 mm, width 1852 mm, height 1482 mm, and wheelbase 2850 mm. The average clearance of the model is 147 millimeters. Such a landing is characteristic of the vast majority of passenger cars. They hold the road well, can drive on a small curb and do not cause inconvenience when driving on roads with poor road conditions. The suspension itself is made in a rather progressive manner. Despite the layout of the model, there is a classic MacPherson strut in front - and a real multi-link in the back. The trunk of the sedan is quite spacious. In the standard position, there is about 429 liters of free space in the back. Thanks to this volume, the car is perfect for the everyday tasks of an ordinary car enthusiast and will be able to take on board several large suitcases during a country trip. For the transportation of long loads, the driver can donate seats and fold the backrests of the back sofa. In the domestic market, the sedan will have at its disposal three engines, exclusively automatic six-speed gearboxes and front-wheel drive. Thanks to a good set of units and a universal transmission, the car boasts good performance characteristics and satisfies most of the needs of a potential buyer. The basic versions of the Ford Mondeo are equipped with an in-line naturally aspirated gasoline four at 2488 cubic centimeters. Despite the rather large displacement, it produces only 149 horsepower at 6000 rpm and 225 Nm of torque at 3900 rpm. With such an engine under the hood, the car gains a hundred in 10.3 seconds, reaches a maximum of 204 km / h and consumes about 8.2 liters of gasoline per hundred in the combined cycle. Alternatively, the manufacturer offers a turbocharged two-liter inline-four. Depending on the version, it produces 199 or 240 horsepower. Thanks to a solid herd under the hood, the sedan shoots up to 100 km / h in 7.9-8.7 seconds and accelerates to 218-233 km / h. Despite the high power, the appetites of such engines are quite democratic - about 8 liters in a combined driving cycle. The new generation Mondeo has received many interesting features. It has a dynamic and memorable design that will perfectly emphasize the character and status of its owner in society. Such a car will look great both in the busy traffic of the metropolis and on high-speed suburban highways. The salon is a realm of excellent finishing materials, verified ergonomics and the highest comfort. Even a kilometer-long traffic jam or many hours of travel will not be able to deliver the slightest inconvenience to the driver. The manufacturer is well aware that models of this class, first of all, should give pleasure from the trip. That is why, under the hood of the sedan, there are powerful and technologically advanced engines, which are a fusion of advanced technologies and many years of experience of engineers. Ford Mondeo is a comfortable and dynamic sedan with a stunning design.