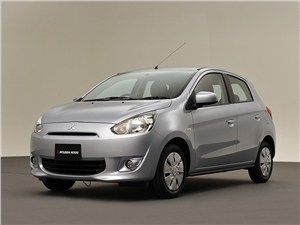 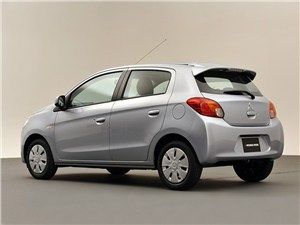 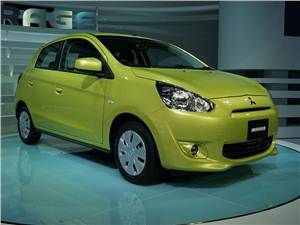 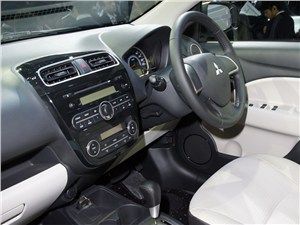 Mitsubishi Mirage, familiar to the European car enthusiast under the name Colt, has changed its class and market niches more than once. Since 1978, six generations have been released, and the last one was released in 2013. The novelty has received many cardinal changes, tried on a new platform, an economical power palette, a practical interior and a redesigned design. The car is a typical urban compact with rather unobtrusive, but modern forms. The large headlamps with large halogen reflectors and turn signal sections around the edges are striking. The radiator grille is a narrow elongated slot. Below, under the bumper reinforcement, you can see the air intake, covered with black plastic mesh with thin black ribs. On the sides of it are located round blocks of fog lights. As for the rear, I would like to note a large inflated bumper, a small trunk lid and a spoiler with a brake light strip. Mitsubishi Colt is a subcompact five-door B class hatchback. Its overall dimensions are: length 3780 mm, width 1666 mm, height 1501 mm, and a wheelbase of 2451 mm. The ground clearance is typical for most city cars and is an average of 150 millimeters. This landing allows you to maintain stability at relatively high speeds and move on roads with poor road conditions. The suspension also has a classic architecture for this class. At the front there are independent McPherson struts with an anti-roll bar, and at the rear there is a semi-independent torsion beam. The chassis is equipped with double-acting hydraulic telescopic shock absorbers and steel coil springs. As for the brakes, they cannot boast of a progressive structure. There are small ventilated mechanisms in the front, and ordinary drums in the back. Mitsubishi Colt is equipped with two different powertrains. Basic versions, including for the domestic market, received a three-cylinder liter inline unit. Due to its modest volume, it produces only 69 horsepower at 6,000 rpm and 86 Nm of torque at 5,000 rpm. The engine mates exclusively with the variator and consumes approximately 3.7 liters of gasoline per hundred kilometers in the combined cycle. Alternatively, the manufacturer offers a motor with a similar layout, but increased by 200 cubic centimeters in volume. Thanks to the modern block head, from 1.2 liters, the engineers managed to squeeze 78 horsepower at 6000 rpm and 100 Nm of thrust at 4000 crankshaft rpm. As a transmission, a variator or a classic five-speed manual transmission is offered. Depending on the configuration, the car will accelerate to the first hundred in 12.4-13.8 seconds and can reach a maximum of 167-170 kilometers per hour. Fuel consumption is quite modest - 5 liters of gasoline per hundred in the combined cycle. Mitsubishi Colt production will be established at the facilities of the company's Thai plant. It is in this market that the model is in the greatest demand and is one of the five most popular cars. In a rich configuration, it has all the necessary options. The hatchback can be equipped with a multimedia system with a rear-view camera and a touch screen, climate control, six airbags, ABS, 14-inch alloy wheels and even a stabilization system.