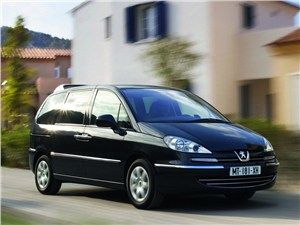 Table of factory and suitable tire sizes for PEUGEOT 807. 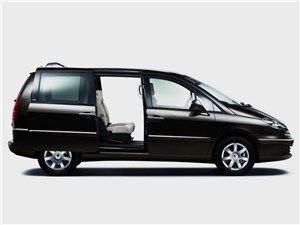 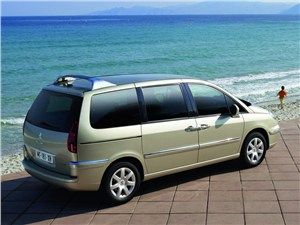 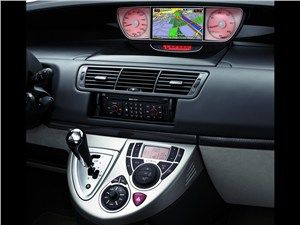 Peugeot 807 can be called a real long-liver. The first original generation came out back in 2002 and lasted unchanged until 2008, when the manufacturer decided to carry out a small planned restyling, which practically did not affect the technical filling. The car itself is the fruit of a collaboration between PSA and Fiat and has several related models built on one common platform. The Frenchman received a design in the corporate style and echoes the rest of the manufacturer's models. Of the common features, it is worth noting the narrow teardrop-shaped headlights with round halogen reflectors and small focusing lenses. The radiator grill is a narrow ventilation slot, covered with many small vertically oriented fins, on top of which the manufacturer's chrome logo is located. Below, on the front bumper, there is a large air intake, covered with a plastic grille with chrome trims. Peugeot 807 is a compact MPV with the ability to install a third row of seats. Its overall dimensions are: length 4727 mm, width 1854 mm, height 1752 mm, and wheelbase 2823 mm. The ground clearance is typical for most European passenger cars and is 130 millimeters. The suspension itself is the result of a deep modernization of the platform from the previous 806. On the front axle there are independent McPherson struts with an anti-roll bar, and at the rear there is a semi-dependent beam. Steel coil springs and double-acting telescopic shock absorbers are installed in a circle. The 807 has a fairly spacious luggage compartment. In the standard position, with the backs of the rear row of seats raised and loaded under the window line, the compact MPV can provide up to 830 liters of free space. For the transportation of oversized cargo, seats can be donated and released up to 2948 liters. Peugeot 807 has a wide range of powertrains, manual and automatic variable transmissions and exclusively front-wheel drive. Diesel versions are equipped with in-line turbocharged fours of 2 and 2.2 liters. In the first case, the motor can produce 120 136 and 163 horsepower, and the older version can only produce 170. It is worth noting that the base unit is equipped exclusively with mechanical variable transmissions. Depending on the version, the compact van picks up the first hundred in 10-12.9 seconds and develops a maximum of 180-200 kilometers per hour. Fuel consumption will be about 5.9-7.2 liters of diesel fuel per hundred kilometers in the combined cycle. Alternatively, the manufacturer offers a two-liter naturally aspirated petrol four. It produces 141 horsepower and works with automatic transmission or manual transmission. Acceleration to 100 km / h will take about 12.9 seconds, and the maximum speed is 180 km / h. With a relaxed driving style, the vehicle will consume 7.3 liters of fuel in the same driving cycle. Despite the age of the model, it has all the modern options. The car is equipped with six airbags, anti-lock braking system and ESP stability control. What's more, each seat is equipped with a separate full three-point harness. The salon boasts a climate system, several trim options, heated front seats, mirrors and rear window. It is also worth noting an advanced multimedia system with a parking aid and navigation.