The release of the CHEVROLET CAPTIVA model was carried out from 2009 to 2019.

Table of factory and suitable tire sizes for CHEVROLET CAPTIVA. 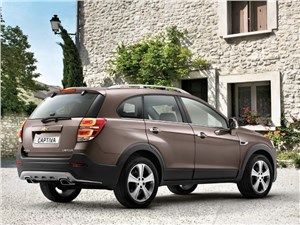 Chevrolet Captiva Despite the fact that the updated Chevrolet Captiva of the 2014 model year was first presented in March 2013 at the Geneva showroom, its sales in Russia started only at the end of September. The last restyling turned out to be superficial and affected only the external design and interior design, and even then only slightly. At first glance, the Chevrolet Captiva changes are noticeable only on the front of the car, where there is a new radiator grill, bumper and headlights. The list of complete sets of diesel versions of the Chevrolet Captiva has also been expanded, to which the LT + version in the five-seat version and the LT version in the seven-seat version have been added. All of them are equipped with a 2.2-liter diesel unit with an output of 184 hp. with a torque of 400 Nm. achievable at 2000 rpm. The Chevrolet Captiva LT now features dual-zone climate control and heated rear seats. In the case of an automatic transmission, an engine start button and keyless access to the car have been added. In some cases, black leather trim can be ordered. In addition to the diesel power unit, the Chevrolet Captiva is offered in Russia with two gasoline engines of 2.4 and 3.0 liters with a capacity of 171 and 258 hp. respectively. Paired with the first of them, only a manual six-speed transmission can be installed, for all the rest a six-speed automatic is also offered. The drive is used only full. In total, the Chevrolet Captiva provides four levels of equipment, five different combinations of engines and transmissions, as well as a five-seat and seven-seat interior design. In various combinations, they form 12 versions that can satisfy any customer's needs. The list of minimum equipment for the Chevrolet Captiva is impressive: heated front seats, adjustable steering column, rear suspension with automatic hold-up, separately opening tailgate glass, power windows for all doors, audio system with steering wheel controls, anti-theft alarm, alloy wheels, roof rails on the roof, rear parking sensors and hill start assist. Added to this list are anti-lock brakes, dynamic stability control and six airbags. Chevrolet Captiva held out on the domestic market until March 2015, when General Motors, which owns the Chevrolet brand, announced the withdrawal of most of the brand's models from the Russian market. At the same time, the assembly of the model at the GM Auto plant near St. Petersburg was stopped.