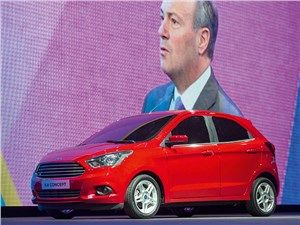 Table of factory and suitable tire sizes for FORD KA. 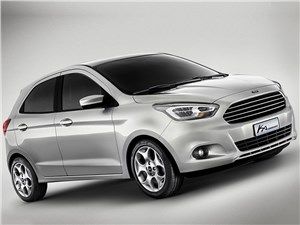 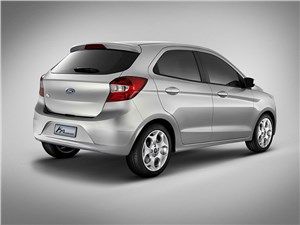 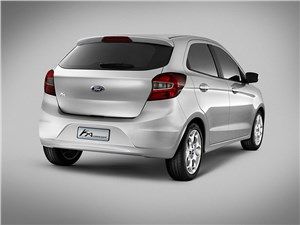 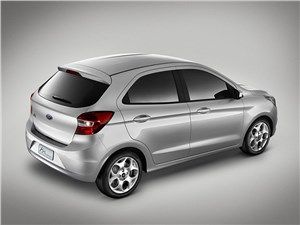 For the first time, the new Ford Ka debuted as a concept at a special Brazilian event in 2013, and a year later, the world saw the final production version. The model will be produced at the Ford plant in S?o Paulo. In fact, the novelty is a full-fledged third generation and is strikingly different from its predecessor. The car changed its class, got a different technical stuffing, redrawn interior and modern design. The front part is made in the current, at the moment, corporate style and echoes the older models of the manufacturer. I would like to note the large, slightly overlapping the wings, headlights with large reflectors of halogen lamps and small sections of direction indicators. The radiator grille is shaped like an Aston Martin, covered with a black mesh with tiny meshes and sporting a thin chrome border. On the front bumper there is a compact air intake, covered with a plastic grille, and on the sides of it there are round blocks of fog lamps. As for the stern, it received a neat spoiler over the rear window, a raised trunk lid and a voluminous bumper. The third generation Ford Ka is a subcompact five-door B-class hatchback. Its overall dimensions are: length 3929 mm, width 1695 mm, height 1524 mm, and wheelbase 2489 mm. Since the model is focused primarily on the Brazilian market, its ground clearance is 155 millimeters. This fit allows you to ride on small curbs and maintain an acceptable ride, even on a bumpy paved road. The pendant itself is made in a classic style for this class. On the front axle there is an independent structure based on McPherson struts with an anti-roll bar, and a semi-dependent elastic beam at the rear. The chassis is equipped with steel coil springs and telescopic shock absorbers. The brakes are also budget-friendly. The front wheels feature 240mm ventilated discs, while the rear wheels have drums. The hatchback will be equipped with two different powertrains, five-speed variable transmissions and front-wheel drive exclusively. Under the hood of the Ford Ka is a naturally aspirated petrol four with a capacity of 1196 cubic centimeters. It has two camshafts, multi-point fuel injection and sixteen valves in the cylinder head. Depending on the version, it develops 70-85 horsepower at 6000-6300 rpm and 105-112 Nm of torque at 4000 rpm. Acceleration to a speed of one hundred kilometers per hour will take about 13.3-15.3 seconds and the high-speed ceiling is at around 159-169 kilometers per hour. With a calm driving style, fuel consumption will be 6.6 liters of gasoline per hundred kilometers at the city pace, 4 liters on the highway and 5 liters of fuel per hundred in the combined cycle. In the basic configuration, the Ford Ka will receive two airbags, 14-inch alloy wheels, central locking, electric beet lifters on the front doors, ABS and a radio tape recorder. For an additional fee, you can purchase a version with air conditioning, multifunction steering wheel and an advanced multimedia system with a touch screen.