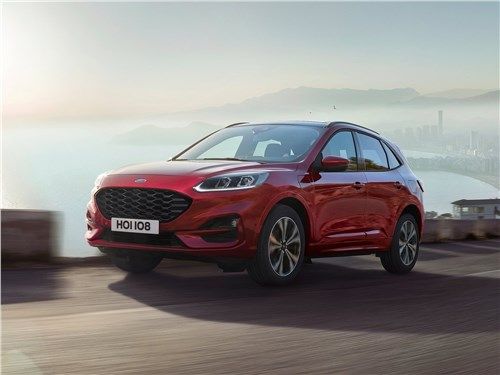 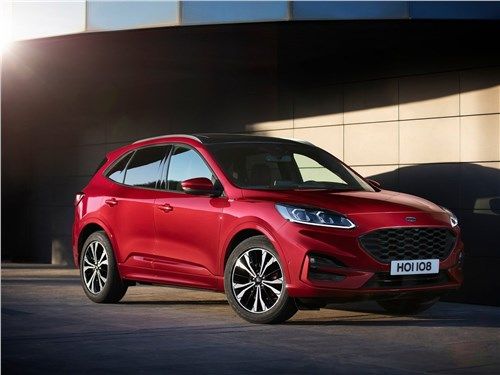 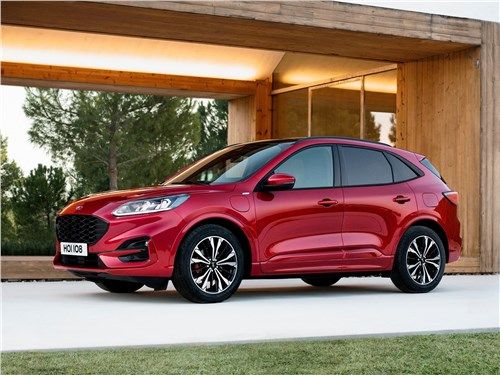 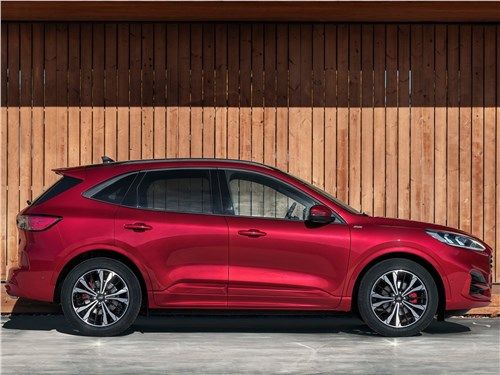 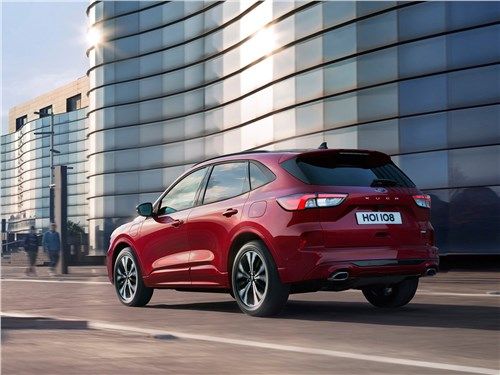 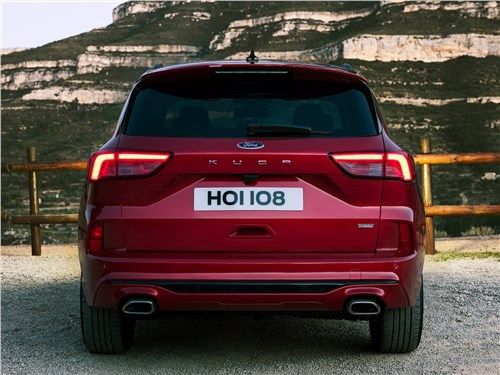 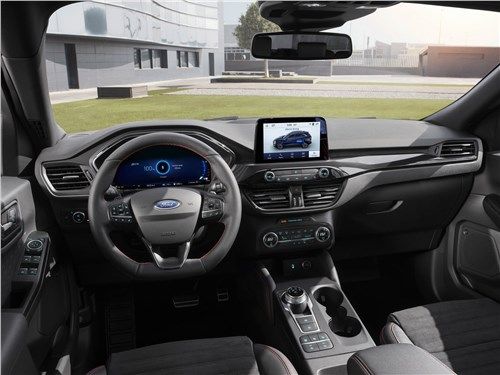 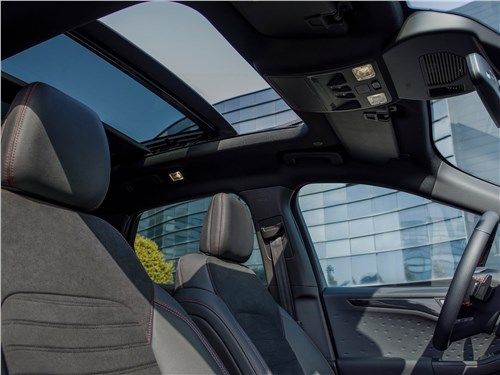 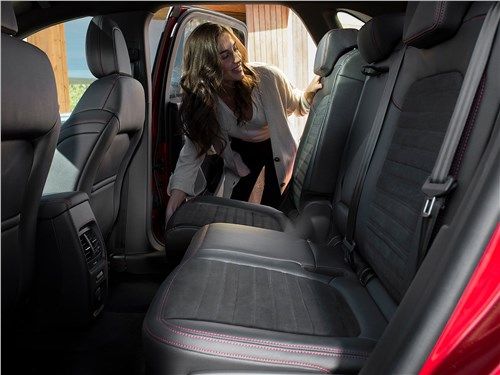 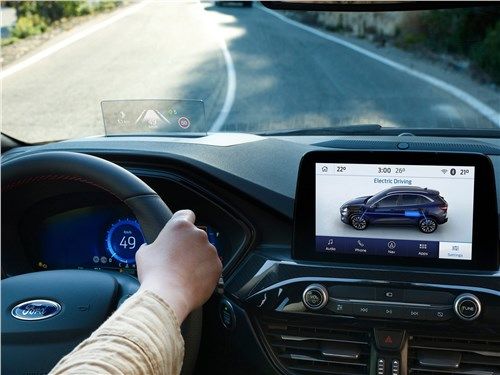 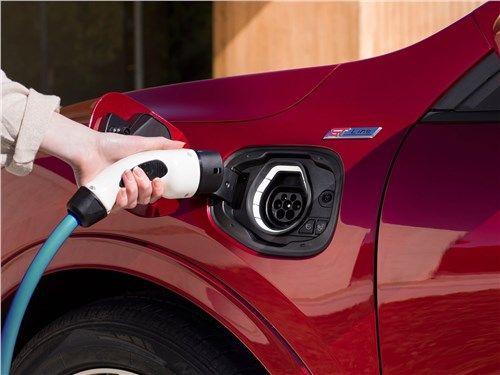 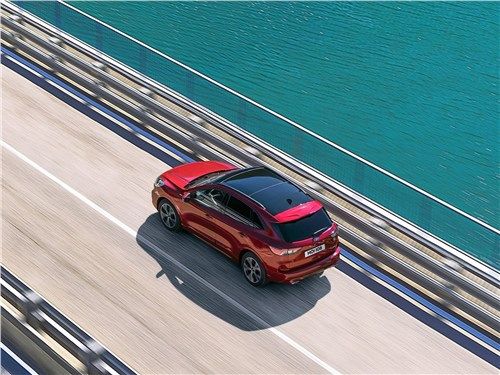 In early April 2019, at a special European exhibition in Amsterdam, the American manufacturer showed off a completely new version of the Ford Kuga, also known as the Escape. It is worth noting that the novelty is a full-fledged, third generation, and not just another restyling. The car is based on a new platform, received a line of compact power units, a more spacious interior, modern electronic systems and a radically different design. It will not be difficult to distinguish the third generation from its predecessor. The novelty has become more like Focus. It has elongated, narrow headlamps with four focusing lenses and a border of LED running lights. The radiator grille has acquired a hexagonal shape with an unobtrusive design made of plastic mesh with large cells. Below it is a trapezoidal air intake and a couple of tiny blocks of fog lights. The stern received a small spoiler, large brake lights and a protruding bumper with two chrome tailpipes of the exhaust system. Ford Kuga is a five-seat urban crossover. After a generation change, it became longer and wider. Its overall dimensions are: length 4613 mm, width 1882 mm, height 1683 mm, and the distance between the wheelsets is 2710 mm. Despite the increase in size, the car has not become heavier. On the contrary, it has become, on average, 90 kg lighter than its predecessor. The torsional stiffness increased by 10%. The cabin has also become longer and wider, and there is more headroom. These results were achieved thanks to the new platform, which is also used on the fourth generation Focus. It is worth noting that the second row of seats in the crossover is mounted on a sled. The back sofa is able to move in a fairly wide range. In the maximally retracted state, passengers of the second row will receive a record, by the standards of the segment, 1035 millimeters in the leg area. An extensive line of power units has been prepared for the crossover. Gasoline versions of the Ford Kuga will be equipped with in-line three-cylinder in-line engines with a volume of 1.5 liters. Their distinctive feature is the turbocharging system and the combined fuel supply. Gasoline can be injected both into the intake manifold and directly into the combustion chamber. The motors are available in two versions - for 120 and 150 horsepower. By default, they mate with six-speed variable transmission manual transmissions and transmit torque only to the front wheels. Diesel crossovers will get a wider range of engines. Initial versions will receive similar 1.5-liter units for 120 horses. They are mated with both mechanics and the latest eight-speed hydromechanical automatic, the drive is also only front. The top versions will receive a much more powerful two-liter turbodiesel for 190 horses. He will receive a plug-in all-wheel drive system. With the change of generation, the Ford Kuga has received several new options. First of all, it is worth noting the unique virtual instrument panel with a diagonal of 12.3 inches. The branded multimedia system has a diagonal of 8 inches and can be equipped with premium B&O acoustics, and also has an active noise cancellation mode. The car will also receive a projection display, a wi-fi router capable of supporting up to ten devices simultaneously, wireless charging and a proprietary Co-Pilot360 electronic security system.