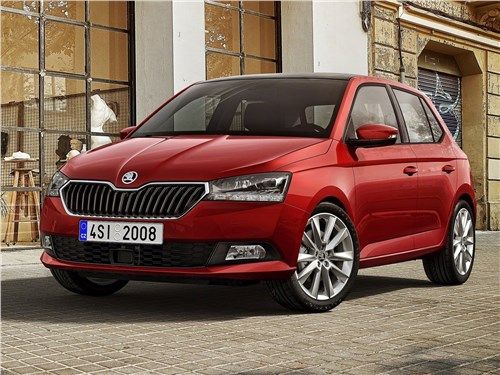 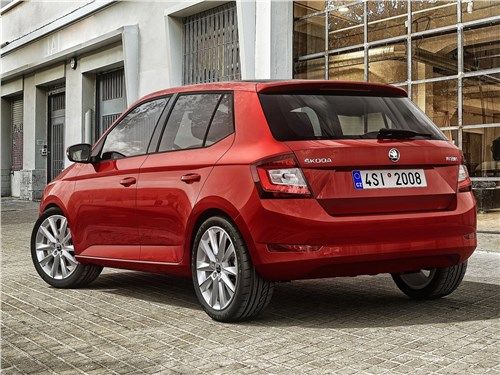 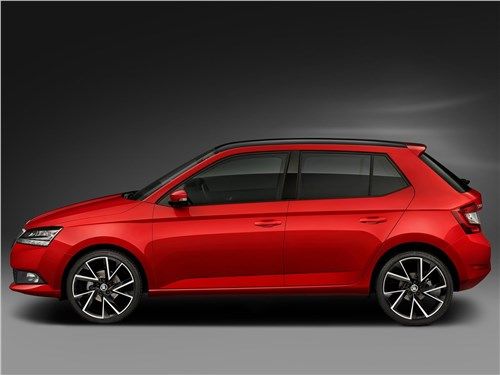 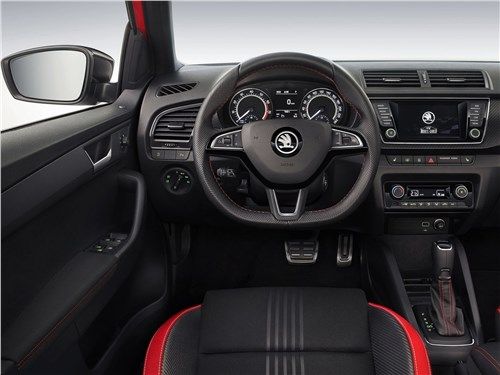 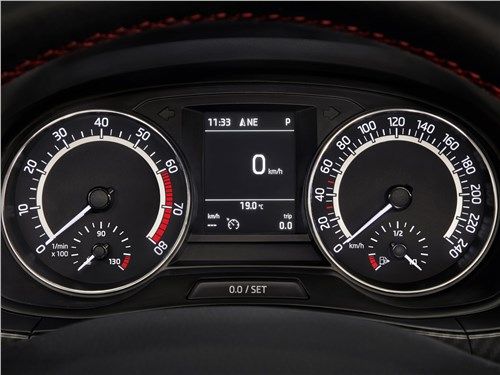 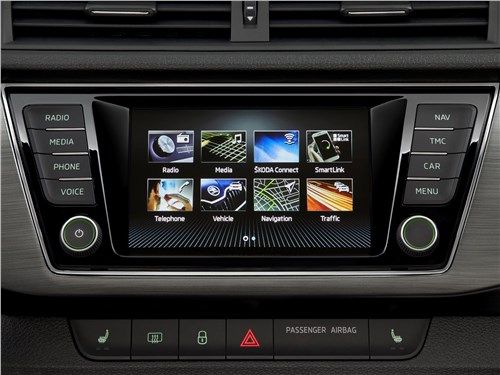 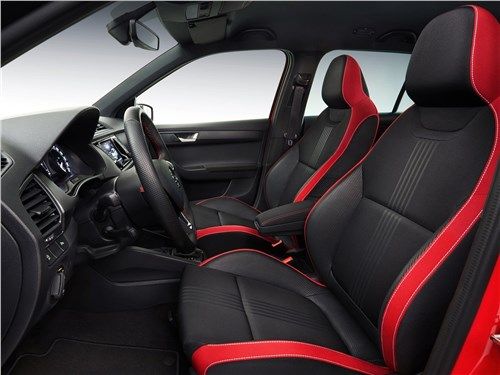 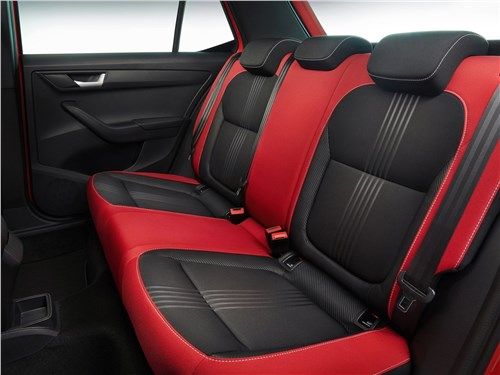 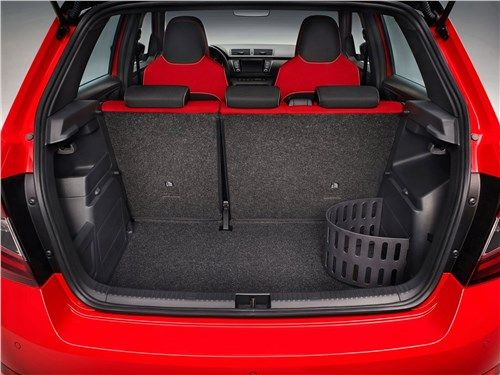 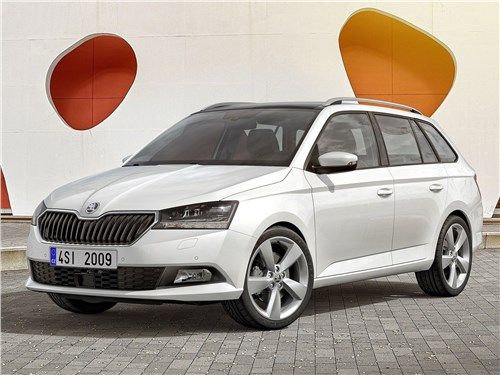 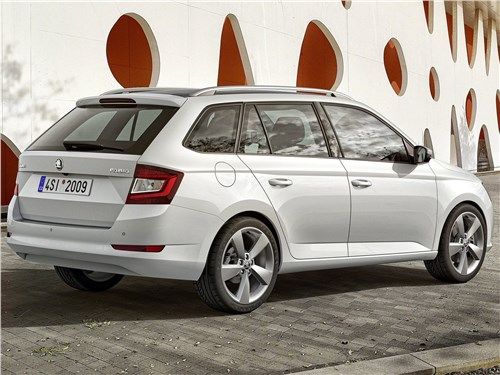 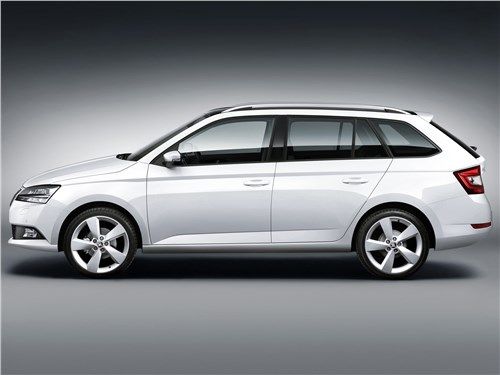 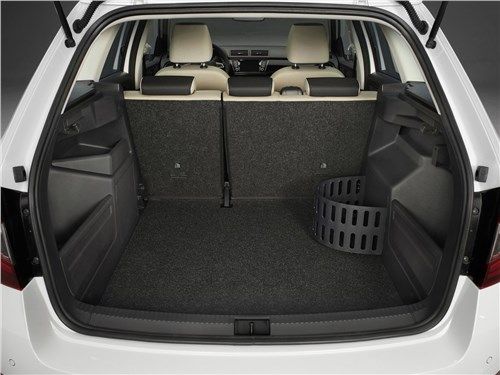 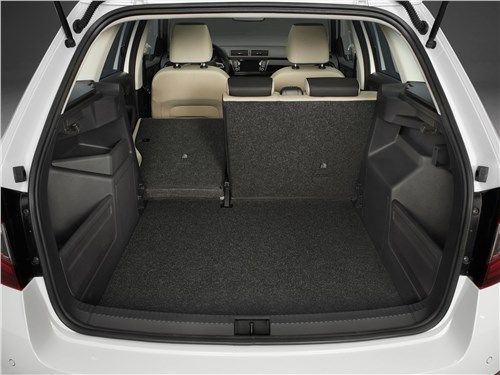 The updated Skoda Fabia appeared before the world community at the international spring Geneva Motor Show in 2018. In fact, the model is the first planned restyling of the third generation, which debuted back in 2014. The manufacturer redesigned the engine range, reshaped the interior and slightly refreshed the exterior. It will not be difficult to distinguish the new product from its predecessor. The new angular headlights are striking. They sport large strips of LED daytime running lights and small focusing elements. The radiator grille has also changed slightly. It retained its shape, however, it received a more design from a set of vertically oriented ribs. In addition, the retouched air intake is worth noting. It is located at the bottom of the front bumper and is covered with a black plastic mesh with hexagonal cells. On either side of it you can see a couple of small angular fog lights. All in all, the model has received several pleasant cosmetic changes that have allowed it to keep up with the times. Skoda Fabia is a budget car of a subcompact class, available in two bodies - a five-door hatchback and a station wagon. In the first version of execution, its overall dimensions are: length 3992 mm, width 1732 mm, height 1467 mm, and the wheelbase is 2470 mm. The station wagon is 265 millimeters longer. The ground clearance is only 135 millimeters. Thanks to this ground clearance, the model will hold the road perfectly and will be able to please with good stability, however, it will be quite demanding on the quality of the road surface. As for the suspension itself, it is made in a rather common key for this class. In the front there are McPherson struts, and in the back there is an elastic semi-dependent beam. Despite its modest dimensions, the car has a relatively spacious trunk. When loaded under a shelf and the backs of the second row of seats are raised, the hatchback can provide up to 330 liters, and the station wagon up to 530 liters of free space. Thanks to this volume, the model is perfect for the everyday tasks of a city dweller, and also perfectly prove itself on a country trip. In any case, if necessary, you can sacrifice the rear seats and free up to 1150 and 1395 liters, respectively. The main sensation associated with this model is the complete rejection of heavy fuel engines. Starting in 2019, the manufacturer will no longer install a 1.4-liter turbodiesel on the model, preferring its gasoline counterparts. As for the transmission, it practically did not undergo changes, the basic versions received a classic five-speed mechanics, and richer configurations, for additional money, can be equipped with a seven-speed preselective robot with two clutches. The drive is exclusively front. Under the hood of the Skoda Fabia is a three-cylinder in-line petrol unit with 999 cubic centimeters. Simple versions are equipped with its atmospheric modification, producing from 60 to 75 horsepower, depending on the firmware of the electronic control unit. Such models cannot boast of good dynamics, acceleration to one hundred kilometers per hour will take a long 14.7-15.7 seconds. Fuel consumption will be 4.7-4.8 liters of gasoline per hundred in the combined cycle. More expensive modifications are equipped with a similar unit equipped with a turbocharging system. Thanks to a small turbocharger, the engineers managed to squeeze out 95 and 110 horsepower. Such models are distinguished by quite good dynamics - 9.5-10.6 to hundreds. Despite this agility, fuel consumption, with a calm driving style, will be about 4.3 liters of fuel in the combined cycle. Fabia keeps up with the times. She has a stylish and memorable design, which, in the best possible way, will emphasize the individuality and character of its owner. Such a car will look organic both in the busy traffic of the metropolis and on highways. Salon is a kingdom of high-quality finishing materials, verified ergonomics, practicality and comfort. Even a kilometer-long traffic jam or a country trip will not be able to cause unnecessary inconvenience to the driver. The manufacturer is well aware that a modern car, first of all, should give driving pleasure. That is why, under the hood of the car, there is a good line of compact and economical units, which are a fusion of modern developments and many years of experience of engineers. Skoda Fabia is a compact and economical car for every day.