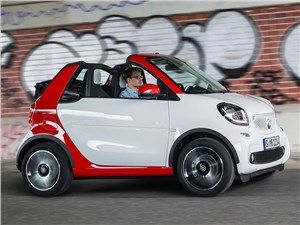 The release of the SMART FORTWO CABRIO model was carried out from 2007 to 2019. 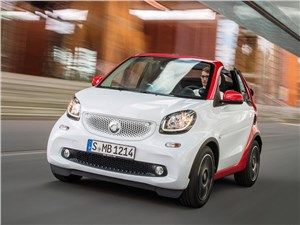 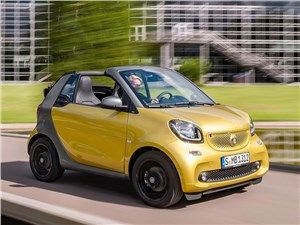 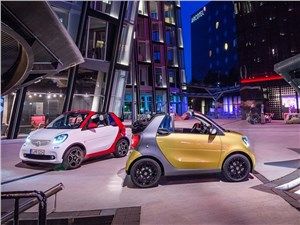 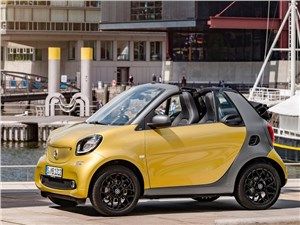 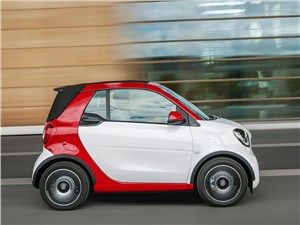 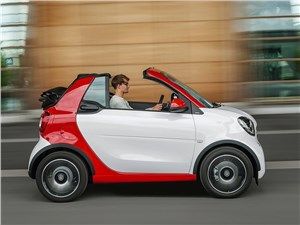 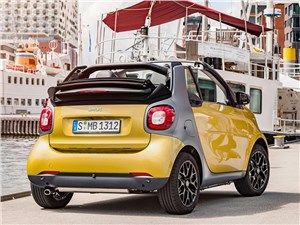 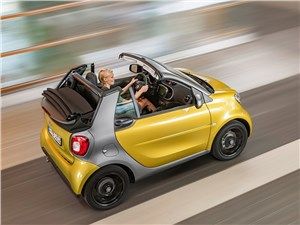 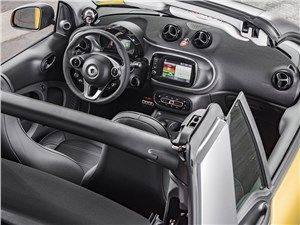 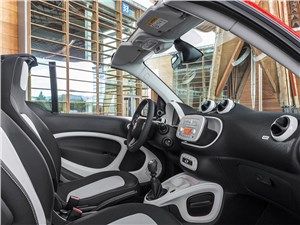 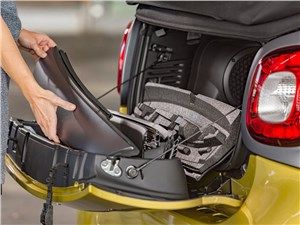 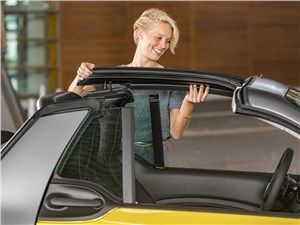 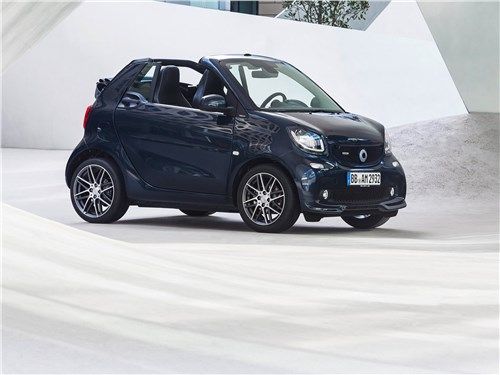 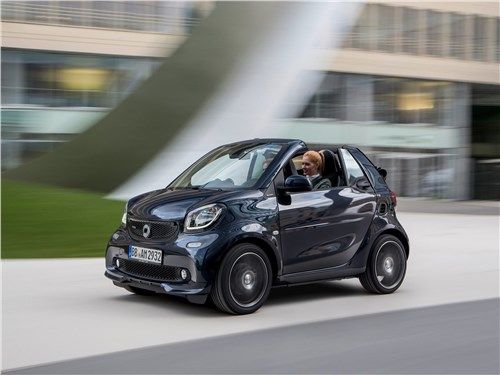 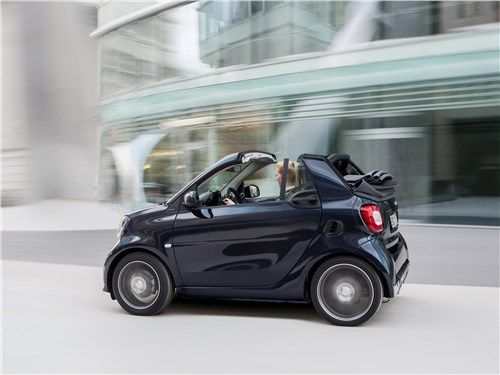 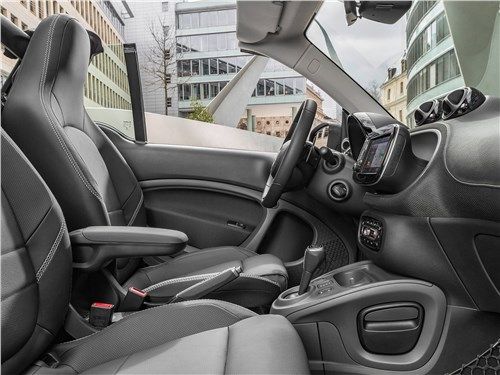 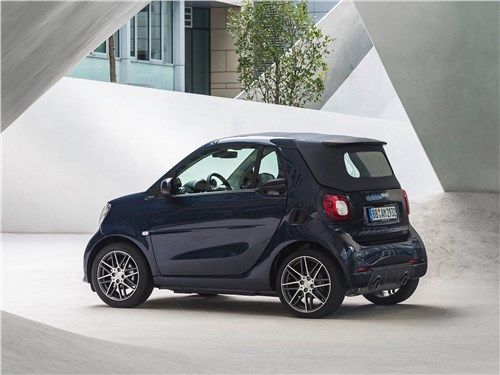 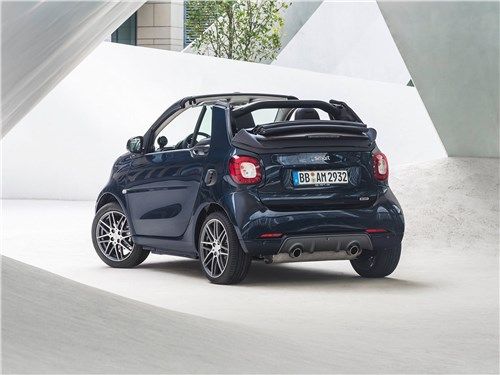 The new Smart Fortwo Cabrio unveiled to the general public at the Fall International Frankfurt Motor Show in September 2015. The model is a full-fledged second generation, and not another planned restyling. It will not be difficult to distinguish the new product from its predecessor. It has cute, rounded headlights with large reflectors and elegant LED daytime running lights. The radiator grill, thanks to its shape, also gives the front end a rather cheerful appearance. It is a cover plate with many round holes of various diameters and a large manufacturer's logo. Under it, on the front bumper, there is a small elongated air intake, made in a similar style, on the sides of which you can see a couple of round fog lamps. In general, the car received a modern and rather interesting design, which completely transformed the image of the model, but at the same time did not lose the family traits and is still perfectly recognizable on the road. Smart Fortu Cabrio is a two-seater A class cabriolet. Its overall dimensions are: length 2695 mm, width 1663 mm, height 1552 mm, and wheelbase 1873 mm. Clearance Smart Fortwo Cabrio is equal to 120 millimeters. Thanks to this ground clearance, the car has a low center of gravity and good maneuverability, which is especially important in the harsh conditions of large cities. The trunk of the Smart Fortwo Cabrio is very tiny, due to the short overhangs and small dimensions of the model. Depending on the position of the seats, there is between 260 and 340 liters of free space at the back. This volume is quite enough for the everyday tasks of an urban car enthusiast, however, even a trip to the airport with several large suitcases can be an overwhelming task. Smart Fortwo Cabrio is equipped with two engines, robotic variable transmissions and exclusively rear-wheel drive. Despite the rather modest list of alternative units, the car copes well with its range of tasks and meets most of the requirements of a potential buyer. Basic versions of Smart Fortu Cabrio are equipped with an in-line turbocharged gasoline three-cylinder unit with a volume of 898 cubic centimeters. Despite its small volume, the supercharging system allowed it to develop 90 horsepower at 5500 rpm and 135 Nm of torque at 2500 crankshaft rpm. For an additional fee, the manufacturer offers to purchase a forced version from Brabus. It produces 109 hp at 5750 rpm and 170 Nm at 2000 rpm. In the usual configuration, the convertible will hit a hundred in 11.7 seconds, and the charged version in 9.5. There is practically no difference in maximum speed - 155 and 165 kilometers per hour. Despite the fact that both versions have different peak power and dynamic characteristics, they are both very economical. The fuel consumption of Smart Fortwo Cabrio will be 4.9-5.2 liters of gasoline per hundred kilometers in dense city traffic, 3.8-4.3 liters during a measured trip on the high-speed highway and 4.2-4.6 liters of fuel for a hundred in a combined cycle of movement. Smart Fortwo Cabrio is a representative of a fairly popular class of cars in Europe. It has a pleasant and memorable design that will perfectly emphasize the status and individuality of its owner. Such a car, despite its modest size, will not dissolve in the gray everyday stream and will not get lost in the large parking lot of the shopping center. Salon is the kingdom of high-quality finishing materials, verified ergonomics and comfort. Even many kilometers of congestion should not bring unnecessary inconvenience. The manufacturer is well aware that cars of this class, first of all, should give driving pleasure. That is why, under the hood of the cabriolet there is a powerful and compact power unit, which is a fusion of innovative technologies and many years of experience of engineers in the field of engine building. Smart Fortwo Cabrio is a bright, compact and economical vehicle, prepared for the harsh conditions of the stone jungle.