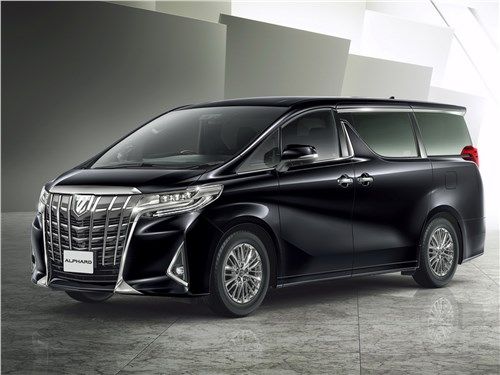 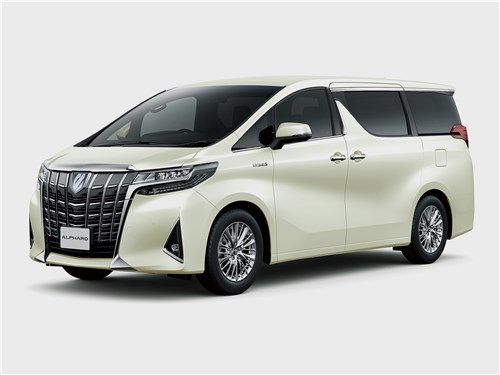 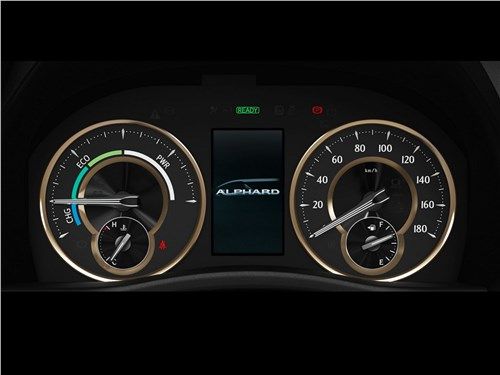 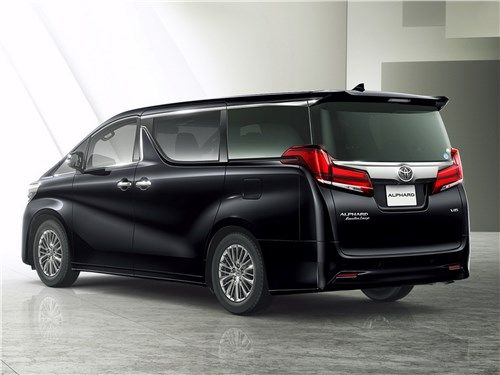 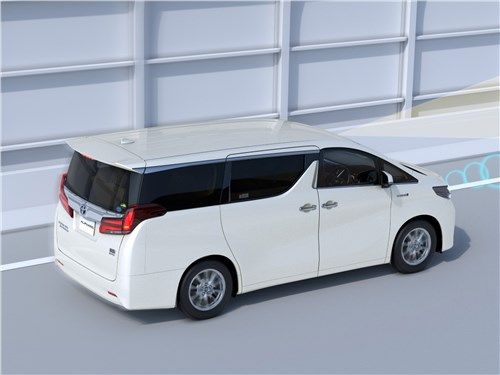 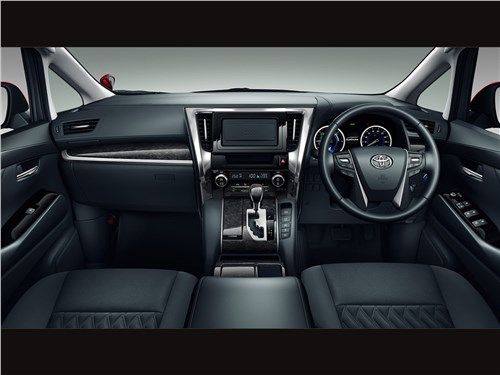 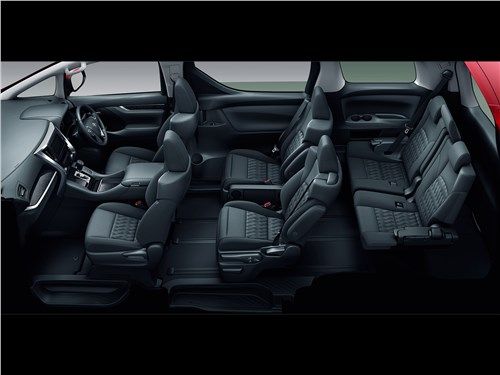 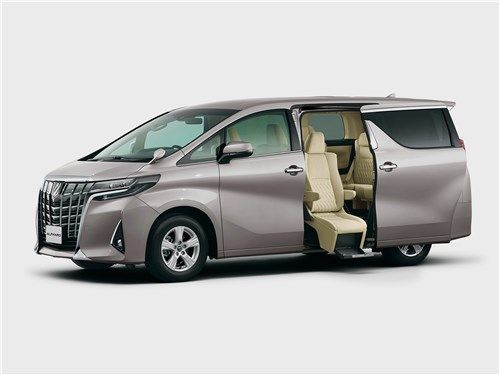 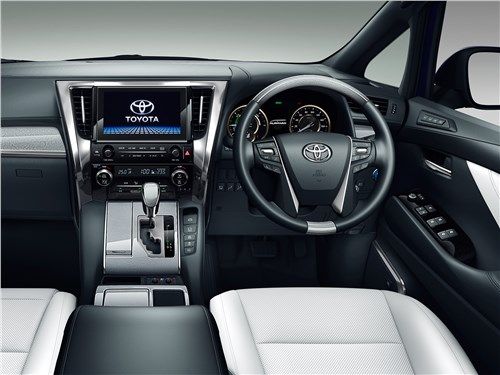 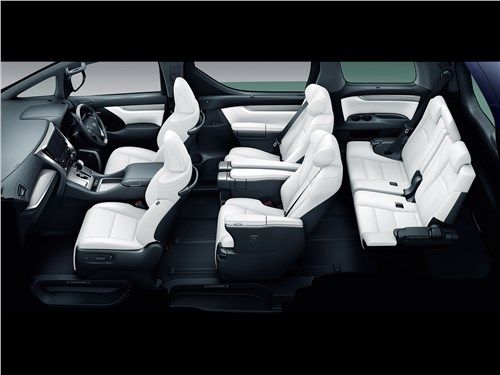 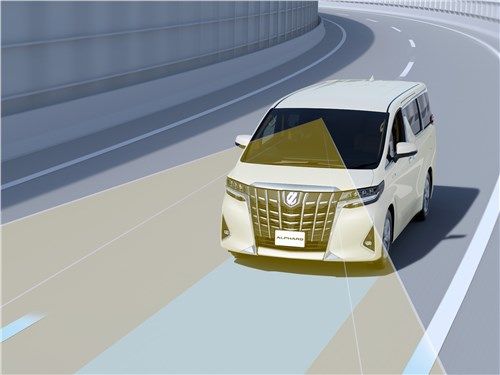 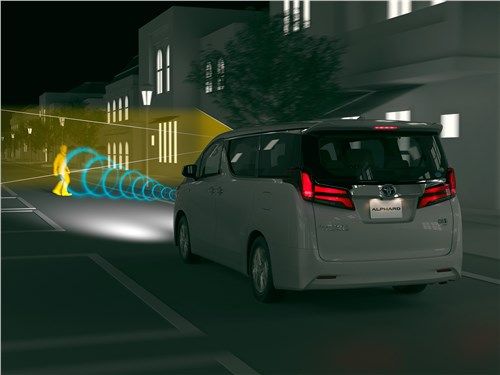 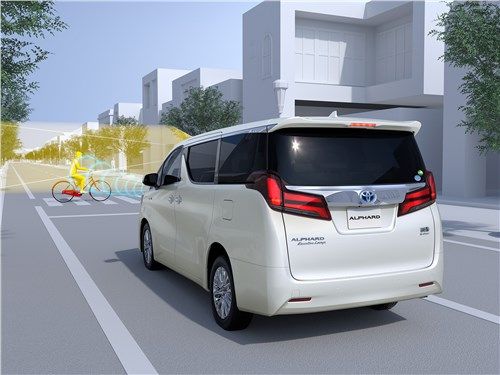 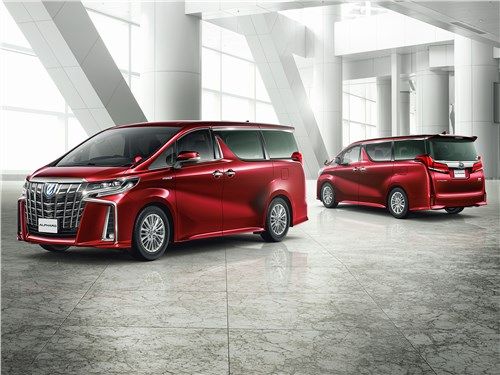 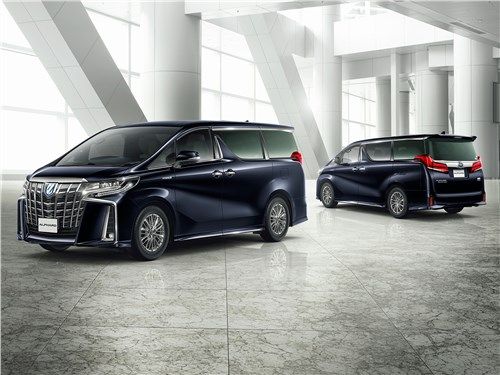 At the end of 2017, the world community saw an updated version of the third generation Toyota Alphard. This is the first planned restyling of the 2015 model. She received a seriously modified technical stuffing, an extended list of options and a retouched appearance. Stylish elongated headlights are striking, they sport a new focusing lens unit and look much more elegant than the pre-styled version. The radiator grille now adjoins the lighting technology and extends to the lower edge of the front bumper. It consists of many quadrangular chrome sections and gives the front end a rather unusual, yet luxurious appearance. Also worth noting is the chrome trim of the fog lamp niches and the exquisite thin-spoke wheels. All in all, the manufacturer has added some nice cosmetic changes that highlight the already strong points of the car. Toyota Alphard is a seven-seater premium minivan. Its overall dimensions are: length 4945 mm, width 1850 mm, height 1945 mm, and the wheelbase is 3000 mm. The average clearance of the model is 160 millimeters. Thanks to this ground clearance, the car has a relatively low center of gravity, can drive over a small curb and does not lose stability, even at high speeds. It is based on a platform with extensive use of high-strength steels, a longitudinally positioned engine and a fully independent suspension architecture - McPherson at the front and multi-link at the rear. In the standard position, the interior of the minivan has a seven-seat layout. At the same time, the first two rows are presented in the form of separate "captain's" seats with a huge number of settings, a platform for the legs and a good range of adjustments. The rear sofa is designed for three passengers, however, it cannot boast of such a level of comfort. It can be folded down to transport bulky luggage. In this position, an almost perfectly flat floor is obtained and up to 1900 liters of free space is freed up. In the domestic market, the minivan will receive only one engine, exclusively front-wheel drive and a new eight-speed automatic variable transmission. Despite the lack of alternative units, the presented set is relatively versatile and able to satisfy most of the needs of a potential buyer. The engine of the Toyota Alphard is a 3.5-liter V-shaped petrol naturally aspirated six with a volume of 3456 cubic centimeters. Compared to the previous generation, it has become somewhat more powerful. Thanks to the solid displacement and the proprietary variable valve timing system, the engineers managed to squeeze out 300 horsepower at 6600 rpm and 361 Nm of torque at 4700 crankshaft rpm. How much faster this version is than the pre-reform version is not reported, but we can say with confidence that acceleration to a speed of one hundred kilometers per hour will take less than 8.1 seconds. Despite the additional 25 horsepower, the economy was largely unaffected. Fuel consumption will be 9.4 liters of gasoline per hundred kilometers in the combined cycle. Alphard fully justifies its belonging to the premium segment. It has a solid and memorable design that will perfectly emphasize the individuality and status of its owner in society. Such a car will not dissolve in the gray everyday stream and will not get lost in the large parking lot of the business center. The salon is a realm of exclusive finishing materials, verified ergonomics, unsurpassed practicality and uncompromising comfort. Even a country trip or heavy traffic during rush hour will not be able to deliver even the slightest inconvenience. The manufacturer is well aware that cars of this class, first of all, should give pleasure from driving. That is why, under the hood of the minivan there is a powerful and technological unit, which is a fusion of innovative technologies and legendary Japanese quality. Toyota Alphard is perfect for both personal and commercial use.