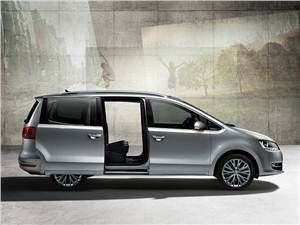 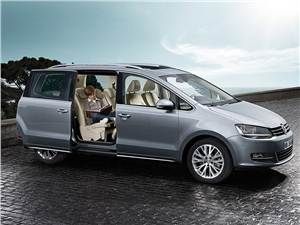 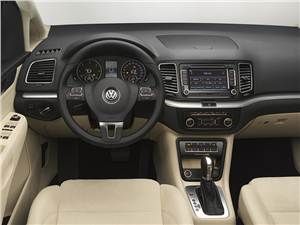 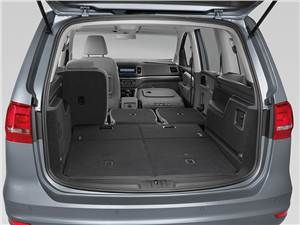 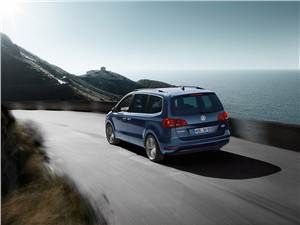 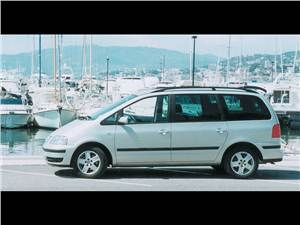 The new generation Volkswagen Sharan was presented to an international audience at the International Spring Geneva Motor Show in March 2010. The novelty is already the second generation in a row and is qualitatively different from its predecessor. He received a completely new line of power units, a different platform, a wide range of additional equipment, a practical interior and design in a new corporate style. The car has very restrained and austere features. I would like to note the new headlights. They received round focusing lens units with edging of LED daytime running lights and small sections of direction indicators. The radiator grille visually adjoins the head optics and consists of two thin chrome trims, on top of which the manufacturer's logo is located. On the front bumper, you can see a small air intake and a couple of angular fog lights. Volkswagen Sharan is a compact van with the possibility of installing a third row of seats. Its overall dimensions are: length 4854 mm, width 1905 mm, height 1720 mm, and the wheelbase is 2918 mm. The ground clearance is typical for most passenger cars and is 163 millimeters. The model is built on the new PQ46 platform. It implies a transverse arrangement of the power unit and the presence of a monocoque body with an increased, compared to its predecessor, content of high-strength steel grades. The suspension has a fairly progressive structure and a completely independent architecture. The front axle houses the classic MacPherson struts, and the rear is a sophisticated multi-link system. The Sharan's luggage compartment is quite spacious. Even in the seven-seat layout, there is about 256 liters of free space in the back. If the driver does not intend to use the gallery, it can be folded down and received up to 809 liters. For the transportation of bulky goods, you can also donate the middle row. In this position, up to 2430 liters are released. Compact MPV has a wide range of power units, is equipped with mechanical, automatic and robotic transmissions. The default drive is front, in some versions the 4Motion system is available, which transmits torque to the rear wheels through a multi-plate clutch. The petrol range is represented by in-line turbocharged fours of 1.4 and 2.0 liters. They give out 150-200 horsepower, accelerate the car to a hundred in 8.3-10.7 seconds and allow you to gain maximum up to 197-221 kilometers per hour. Fuel consumption will be approximately 7.2-8.4 liters of gasoline per hundred kilometers in the combined cycle. Diesel versions will receive exclusively in-line two-liter turbo four. Depending on the version, they produce from 115 to 170 horsepower. Acceleration to 100 km / h will take from 9.5 to 12.6 seconds, and the high-speed ceiling will be located at around 184-210 km / h. Fuel consumption is quite democratic - 5.5-6.2 liters of diesel fuel for every hundred in the combined cycle of movement. Volkswagen Sharan is primarily aimed at family buyers, which means it has a wide range of safety systems. Already in the basic configuration, the car will receive seven airbags, ABS, stabilization system, as well as MSR, ASR and ADS. Other options include a climate system, active cruise control, alloy wheels, a parking aid, heated seats, and an advanced multimedia system with premium acoustics, navigation and a rear-view camera.